Read more about our work on the Upswing Fund for Adolescent Mental Health here. 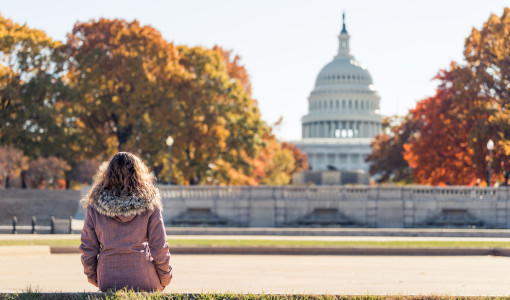 of the US population, but fewer than

women were elected to Congress in 2018.

Return to What We Do

Women make up 51% of the population, but less than 30% of elected officials in the U.S. Although many organizations train women to run for office, the space is underfunded, and thus their ability to be flexible and coordinate with other groups is limited. Given the number of small organizations working in the field, it can be difficult for funders not deeply entrenched in this work, to determine how to best invest.

What are we doing about it?

The Ascend Fund, powered by Panorama Global, pools philanthropic capital to support nonpartisan, nonprofit organizations that prepare women to run for office and break down barriers that keep them from running and winning elections. Based on a year of foundational research, Ascend developed a two-pronged strategy and will invest at least $8 million in programs over the next three years.

Who receives funding from The Ascend Fund?

The Ascend Fund launched in 2018 with seed funding from an anonymous donor. Ascend’s grantees are organizations working to elect more women to political office. Ascend is currently working with four organizations, which focus on varied issues in this space.

Vote Run Lead offers campaign trainings for women candidates and staff, and New American Leaders facilitates trainings and fellowships for first and second generation immigrants interested in running for office. With additional resources from The Ascend Fund, Vote Run Lead and New American Leaders will coordinate their programming and work together to train and recruit women for state legislative seats.

“On the policy-making side, we know that women do government differently. We’re more likely to work across the aisle, to bring more constituents into the fold, to add to the policy agenda things that often women and families care about, but we’re also likely to have different and unique perspectives on the top issues of the economy and pay and jobs and health care” –Erin Vilardi, VoteRunLead (November 12, 2018, New York)

What is our progress?

In 2018 and 2019, The Ascend Fund invested $1 million in grass-roots organizations tackling the barriers that limit women’s engagement in civic and political processes. While it is too early to assess impact, Ascend is monitoring and evaluating the organizations it is funding. Additionally, continued investment in organizations committed to gender equity will be vital for sustained progress.

Get regular updates on our latest projects and open positions.

Thank you for subscribing to our newsletter.